A headdress made out of the scraped out head of a wolf.

The Wolf Headdress is a type of headwear that has been implemented into Experimental Rust. It is equipped in the head slot, and appears to be a carved-out wolf head. As a developer, on the official Rust website commented, "Soon you'll be able to show your enemies the beast that lurks within your soul!"[1] The Wolf Headdress also provides better protection than the bucket helmet, and its stats are almost as good (if not better) than the coffee can helmet.

Overall, it's one of the best early-mid game helmets, due to its high protection against all elements and its low cost. 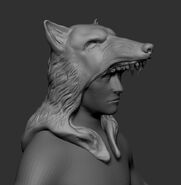 Developer screenshot of the headdress, during model development.

Developer screenshot of the headdress, during an engine render.