View source
watch 02:40
World of Warcraft: Dragonflight - The Loop
Do you like this video?
Play Sound

Placing and authorising with the cupboard will make it so only you can build in a 50 meter radius of it. If you want your friends to build, they'll need to authorize too. You should protect this.

x1,000
The Tool Cupboard is a deployable item that is typically used to provide base protection and/or secure an area by preventing unauthorized players from being able to upgrade their items beyond twig state, in the vicinity of the base that the cupboard occupies. The protection distance is roughly 6 foundations away from the base at any point. The area of protection is shaped around the players base, above the bottom of the cupboard. Within this protection area of the Tool Cupboard, players will have the "Building Blocked" status; unauthorized players will be blocked from placing and upgrading structures in the area of the cupboard.

To deploy a Tool Cupboard drag it onto your Action Bar, select it and click(default "Left Mouse Button"), while aiming at the desired location. Initially you will be affected by a "Building Blocked" debuff as a newly spawned cupboard's Authorization List is empty by default. To gain "Building Privilege" and be able to build in the area, target the cupboard press the Use key (default "E") to authorize yourself. Pressing the Use key (E by default), while already authorized, will remove you from the Authorization List. It is possible for multiple players to approach the cupboard and authorize themselves at any given time.

Should you need to restrict authorized players' building privileges, you can clear the Authorization List by targeting the cupboard, holding the Use key in order to bring up the Wheel Context Menu and selecting the "Clear Authorized List" option. Any player, regardless of his authorization status, may clear the List. A Tool Cupboard can be locked by a Code Lock or a Key Lock. The Tool Cupboard has 24 slots for building upkeep.

Resources for 24 hours of upkeep will be displayed if you open the TC. Once you place at least one of every resource needed for upkeep, it will tell you how much time you have left before these resources will be used and your base will start decaying. Items placed inside the TC and needed for upkeep will gradually despawn overtime.

Any kind of resource can be placed in the TC, even if it is not needed for upkeep. 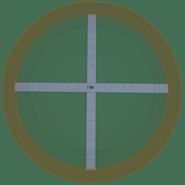 The protection area as seen from the top.

The protection area as seen from the side.