View source
watch 02:30
Dead Cells Final DLC - The Loop
Do you like this video?
Play Sound

A metal trap that can injure people and animals.

The Snap Trap, also known as the Bear Trap, is a type of offensive trap that can be placed on the ground. The Snap Trap does 51 initial damage, followed by 30 Bleeding damage. There is also a high chance of becoming INSTANTLY Wounded. The Snap Trap does not appear to damage fauna. Bleeding can be ameliorated or removed with a Bandage. Snap Traps can be disarmed by unfriendly players, with any weapon capable of being used outside of the trap's range. Snap Traps' range far exceeds the size of their model, so they can be easily hidden behind objects and remain effective.

The Bear Trap must be re-armed every time it is used which does not require any additional resources.

When placed in a Recycler, snap traps will yield: 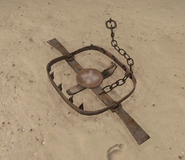