Extracts oil from the ground.

The Pump Jack is the most reliable way to obtain Crude Oil, and in turn, part of a process of tripling players' supply of Low Grade Fuel.

The Pump Jack uses 1 Low Grade Fuel to produce 1 Crude Oil. Crude Oil can then be refined with the Small Oil Refinery for a 1:3 Crude Oil:Low Grade Fuel return.

The Pump Jack was once a deployable item, but now is an indestructible object at Monuments such as the Industrial Train Yard.

Similar to the Mining Quarry, but instead the output is Crude Oil. Once fuel is put in, its engine can be started and the Pump Jack will operate until turned off or it runs out of fuel. Over time the Pump Jack will automatically pump Crude Oil which can then be collected. The Pump Jack is available only in Radioactive Town locations or near a small warehouse location.

Pumpjacks became no longer craftable as a deployable object as of Devblog #87. 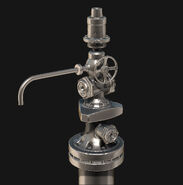 Close up on a component of the oil derrick.

Developer screenshot of the oil derrick.