The Outpost is currently one of two designated safezones in the game. It resembled a small partially destroyed town. It contains all basic utilities, such as the Research Table, Workbench Level 1, Recycler, Repair Bench, Small Oil Refinery, Small Water Catcher, Barbeque and six Vending Machines. Multiple Hobo Barrels can be also be found here but cannot be used.

Here is a guide video detailing everything you need to know about the Outpost. It includes everything this wiki page has to offer and sums it up quite nicely and goes into detail in some places.

The Outpost is permanently guarded by Outpost Scientists (green hazmat suit) and there are also Scientist Turrets scattered around the Outpost. Both the Scientists and Turrets are friendly, but only to players that are not holding any weapon (kill-able item) in the hands, with exceptions being the Rock, Torch and Flashlight. The player will have 5 seconds to disarm, if they don't, the turrets will shoot until the player dies. After a player dies, they won't be able to enter the area for a short period of time. Other players won't be able to loot them inside the Outpost, which may make it difficult to obtain the player's items back. The only way to get the items back is to wait until the lethal defenses calm down, then they can loot their body. Sleeping (going offline) inside outpost also causes the player to die in about 10 minutes.

When inside, players cannot equip weapons.

If you are hit by turret fire you will get a countdown of full 30 minutes. It should also be noted that any firing of weapons or hitting objects with tools near other safe zones will initiate the 1 minute countdown at all safe zones.

Once the Outpost becomes hostile a 30 minute countdown will begin before becoming friendly again. This countdown is visible at the top of the screen when triggering hostility inside the safe zone, or if you are shot reentering the safe zone while it's hostile. Being in range of the turrets does not necessarily mean you are in the safe zone so you may not see this timer while still taking fire.

If you are hit by turret fire, the countdown will reset. The turrets will fire at you from quite a long distance, however, they become more inaccurate the further away you are.

Repair Bench and the Recycler. 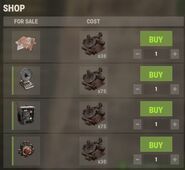 Resource Exchange - June 20, 2020
Add a photo to this gallery
Retrieved from "https://rust.fandom.com/wiki/Outpost?oldid=96914"
Community content is available under CC-BY-SA unless otherwise noted.