The Muzzle Brake is a Weapon Attachment that lowers the recoil and decreases accuracy and damage of a gun.

The Muzzle Brake will reduce the vertical recoil of the weapon, to which it is mounted, by 50%.

The major downsides to using the Muzzle Brake is that it alters the weapons accuracy by adding a huge aimcone making the gun majorly inaccurate , and decreasing bullet velocity.

The Muzzle Brake can be crafted with:

The following sight pictures depict the effect of the Muzzle Brake on the bullet spread in-game. The tests were conducted with an M249, equipped with a 4x Zoom Scope, firing regular 5.56 Rounds at a distance of 100 metres. The red overlay shows where the first fired shot landed and subsequently the target of the test. After each shot, the M249 was reaimed at the centre red overlay and fired again. The blue overlay represents the bullet spread. 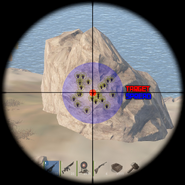 M249 with the Muzzle Brake equipped. 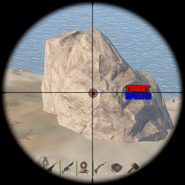 M249 without a Muzzle Brake.

A rendering of the Muzzle Brake.
Add a photo to this gallery
Retrieved from "https://rust.fandom.com/wiki/Muzzle_Brake?oldid=96947"
Community content is available under CC-BY-SA unless otherwise noted.