View source
watch 03:01
Wiki Targeted (Games)
Do you like this video?
Play Sound

A hazmat suit made from radiation resistant rubber.

The Factory Building in the Launch Site and the Broken Cooling Tower at the Power Plant are currently the only areas in procedural generated maps that requires more radiation protection than the Hazmat Suit can offer.

When placed in a Recycler, the Hazmat Suit will yield: 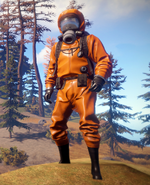 Closeup of the old Hazmat-wearing corpse

Hazmat as of 19 of January 2018
Community content is available under CC-BY-SA unless otherwise noted.
Advertisement