View source
watch 02:30
Dead Cells Final DLC - The Loop
Do you like this video?
Play Sound

Light up the night sky with this brand new red flare!

As with all light sources, the flare poses the risk of making it easier for enemies to see the user.

Flares can be thrown and light up an area without the item being held, hopefully making the enemy visible and creating glare, for nightly raids or engagements of any kind during nighttime.

Flares can be thrown into the air to signal teammates to a place where the team could regather (a rallying point).

Flares are mainly only used to gain gun powder from recycling or to light up a dark cave.

Flares thrown into water will be extinguished. 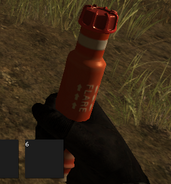 A flare being held by a player (Rust Legacy)

Several flares casting a bright red light during the nighttime