An electronic lock. Locked and unlocked with four-digit code.

The Code lock is one of two player-used locking items. It is secured by entering a four-digit PIN in a prompt. Any player can enter a PIN into the lock by holding the 'use' button on the device. If the correct PIN is used the lock will remember the PIN and the door can simply be opened by pressing the 'use' key when facing the door, rather than the Code Lock itself. Any player that is "remembered" by it can change the PIN used, or set a Guest PIN, to be used by visitors. When entering a code, the player can press the icon marked "C" to correct a mistake.

You can upgrade the door after placing the code lock on it. Once placed, the lock itself cannot be destroyed. It has to either be removed by an owner or the door it is attached to must be destroyed.

The Code Lock's display glows green when unlocked and red when locked.

When a player enters the PIN incorrectly they receive an electric shock in an attempt to deter brute force attacks. The damage increases in increments of 5 (starting at 5 damage) for every failed attempt, these increments reset every 10 seconds.

The maximum number of key combinations is 10^4, or 10000 possible combinations. This makes it incredibly tedious and impractical to "brute force" the code of another player's base.

The Code Lock can be crafted with: 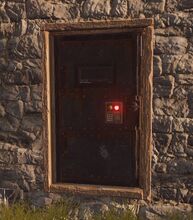 The new Code Lock model locked and on an Armored Door.

The old model of the Code Lock unlocked and mounted on an armored door.

The code has been entered incorrectly, causing the Code Lock to do electric damage to the user.
Add a photo to this gallery
Retrieved from "https://rust.fandom.com/wiki/Code_Lock?oldid=94237"
Community content is available under CC-BY-SA unless otherwise noted.