View source
watch 02:40
World of Warcraft: Dragonflight - The Loop
Do you like this video?
Play Sound

The Cave is a naturally occurring Monument in Experimental Rust, typically found on most larger procedurally generated maps. Unlike other monuments, caves do not incur a "Building Blocked" penalty in certain areas, effectively allowing for setting up inside them.

There are currently nine different types of cave layouts that exist in Rust:

The small sized caves comes in three different layouts and they all include a single entrance and exit. The puzzles inside the caves are easy and non-deadly. They also include one or two build rooms.

The three medium sized cave layouts will have on average two or three points of entry. The network complexity is harder to memorise and they might also include a single deadly trap. The puzzles are a bit more difficult and they include two to four build rooms.

The three large sized cave layouts may have as many as five points of entry and exit. The network complexity is the hardest of all caves and they include several deadly puzzles. The caves might also include up to eight different build rooms

Certain areas inside the caves allows for player made structures. These buildable areas are marked with small tree stumps at the entrance of a cave room.

Small minable rock nodes may spawn inside the cave tunnels. 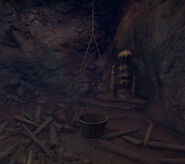