The Bandit Camp (also referred to as Bandit Town) is a type of Monument. The camp contains several huts inhabited with Merchant NPCs as well as heavily armed NPCs known as Bandit Town Guards. The Merchant NPCs will sell military-grade guns and grenades in exchange for Scrap, sell food, as well as buy your materials such has HQM for Scrap. The guards will attack any player who is hostile inside the Bandit Town or any player who harms the guards themselves There is also a restored 'dredge' which contains a Casino where players can gamble away their Scrap on a wheel similar to roulette. Weapons cannot be drawn in bandit camp, with the exception of the stone, the torch, and the flashlight. And also the Bandit Camp contains a Recycler. It is located at the building which has the casino in it.

As of July 2nd, 2020, the bandit camp has converted into a Safe Zone like the Outpost. Like the Outpost, you cannot sleep in the Bandit Camp for more than 30 minutes, or you will be killed. A new vendor has emerged called Air Wolf, where you can purchase a minicopter for 750 Scrap, or a scrap helicopter for 1250 Scrap. The recently purchased aircraft is only accessible to the purchaser for up to 2 minutes before it can be appropriated by another player. Within the same building, another vendor sells engine components of Medium Quality that can be purchased in order to help in restoring vehicles for movement.

As of update 238 (February 4th, 2021), there is a Drone Marketplace positioned inside of the bandit camp. It acts as a safe and fast way to buy goods from any shop or vending machine.

Here's a short guide video about the bandit camp. It includes most things you need to know about it like safezones, services and more. 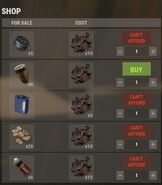 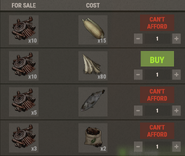